The public hearing to consider the re-zoning of 105 Keefer in Chinatown will begin on May 23. This is the letter I sent opposing the proposal. 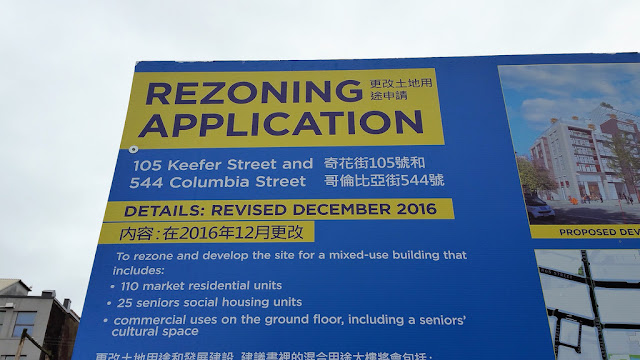 This letter formally expresses my opposition to the 105 Keefer Street rezoning proposal. Currently, my research and teaching at UBC focuses upon Chinatown's heritage and history, as well as it's future development as a signature community and destination site for all of Vancouver. Chinatown was a large part of my childhood. But I am not alone in seeing Chinatown as a crucial asset for all Vancouverites, whether they grew up there or not. Even though Chinese Canadians now live in every neighbourhood of the city, and other clusters of businesses and restaurants provide services that historically were located in Chinatown, there is no other place in Vancouver that can become the centre of gravity and place for meaning-making and heritage that Chinatown represents. The history of Chinatown as a neighbourhood dating back to before the founding of Vancouver makes it a unique site that once lost, cannot be recovered.

Chinatown is a special part of Vancouver, and it needs to be a dynamic and vital community which retains its special characteristics even as it changes. Vancouver cannot afford to allow 105 Keefer to be rezoned for such an underwhelming proposal. Although this building would not face opposition if it were located 5 blocks southward, it is the fault of the developer that they chose the wrong location. The city cannot change its zoning and its commitments made in the Council-approved Chinatown Vision of 2012 in order to rescue a developer from its bad decisions. The fact that three rezoning proposals have already failed indicate that the mistake is on the part of the developer. The adage in real estate of the top three factors for all development decisions being "1. Location. 2. Location. 3. Location" is clearly belied by the poor decision-making of the developer in choosing this location to plan a condominium development that requires rezoning. Why should city taxpayers and the local neighbourhood pay for their mistake? Why should we rescue them from their lack of awareness of simple neighbourhood plans and desires, which took over a decade to create through the consensus-building process into which community members and City Planners put so much effort?

Approving this project will set a precedent for future projects that creates an unsustainable path and corrosive effect that in essence debilitates the strategic goals set out and approved by Council in the Chinatown Vision. As a minimum consideration, I urge you to not approve the rezoning application for the following narrow yet important criteria under existing rezoning criteria:

- The Keefer Triangle is a culturally significant site for both the community and all of Vancouver that should not be used for residential condos.

- The height of the proposed building is significantly and disproportionately greater than the buildings next to it, in particular the protected heritage buildings that abut it on Pender

- It is more massive and dense than all the buildings next to it, with an FSR that is multiples higher than any other part of the city, let alone Chinatown

- There is insufficient seniors housing as a Community Amenity Contribution when the opportunity cost of the development is considered.

The rezoning proposal was rejected by the City of Vancouver Chinatown Historic Area Planning Committee, from which the City of Vancouver should take direction. There is a reason that the rezoning proposal has been rejected already three times by community groups, by CHAPC, and by a broad spectrum of those who care about Chinatown from all across Vancouver. It is not the right use of a crucial anchor space in Chinatown, and once it has been improperly used, the devastating effects on the whole neighbourhood will be irreversible. The opportunity cost of a failed and inappropriate use of this important location will have consequences far beyond the existing space, since the proposed building adds nothing to Chinatown and in fact creates a huge deficit by squandering a crucial site that could leverage surrounding heritage and public use sites.

It would be politically untenable and undemocratic to have a representative committee such as CHAPC be ignored in such a high profile decision that goes to the heart of why CHAPC exists in the first place. It would be an insult to the community volunteers who in good faith work on that committee, and lead to a corrosion in faith in city government. The consequences for every city project moving forward in Chinatown but also city wide would be irreparable. This is the line in the sand that has been drawn, and the political cost to City Councillors will be high if it is approved, but perhaps more devastating will be the widespread belief among so many young Vancouverites who have come out in opposition to the 105 Keefer development that their voices are not being heard and that their passionate devotion to the future of Chinatown is being dashed. The fallout from such a blow is hard to calculate, but I would predict that it will have severe consequences that go far beyond 105 Keefer. This rezoning proposal has been a tipping point for the last three years, and how it is solved will reflect upon City Government for decades to come.

I urge City Council to create a process by which we can have a win-win for all, rather than the lose-lose which an approval of the rezoning will create. Even the developer will lose if this rezoning is approved. Whether they realize it or not, the building they propose will never be accepted even after it is built, and their brand and the building itself will become a symbol for generations to come of their folly and the weakness of the City Council in the face of the hard decisions that they are elected to make.

Although there are many possible uses that do not squander the location's importance and possibilities, we should have a considered and consultative process with the proper planning tools (cultural and social planning, as well as developer incentives), so that the site can be considered in the context of a broader plan for the Keefer Triangle/Square and south Chinatown entry.

We need to wait for a proper plan for Keefer Triangle/Square and the south entrance to Chinatown. This is vital because of the development that will follow the Georgia Street Viaducts being removed and the False Creek Flats being rezoned. If we do not actually create a plan that uses the rezoning of this crucial site with some strategic purpose, then why are we allowing a rezoning?

At the memorial for Joe Wai in early February, the parallels between this moment and the freeway fight were clear. Not only were veterans of that struggle clear in how they saw the connection, most of the 100s of attendees were girding themselves for a similar struggle and inspired by the death of Joe Wai to not squander his life's work by allowing a rezoning that he literally spent his final days opposing.

As with the Chinatown Freeway and Strathcona struggle four decades ago, this is a generational fight that will define the history of the city itself. Do you want to be on the wrong side of history?