During 2010, I had the privilege of being involved with a unique process organized by the City of Vancouver. Recognizing that in Vancouver, we stood at a historic juncture in which new immigrant communities have transformed the populations of our city, we began a conversation that we hoped would allow for the creation of a common future together for immigrant and aboriginal communities. Moving forward meant creating a new vision of Canada that recognized a history of injustices to both aboriginal peoples and non-white immigrants. This terrible history--wrought by white supremacist policies of land dispossession, residential schooling, immigrant exclusion, and racial discrimination in voting, housing, and employment—needed to be acknowledged and its legacies made widely known before a more optimistic future could be envisioned together. We hoped that if this process could be started in Vancouver, that it also might inspire other cities and regions of Canada to undergo a similar process of dialogue that would help lay the groundwork for a transformation of our society.
As one of three Co-Chairs, along with Councillor Wade Grant of the Musqueam Nation and Susan Tatoosh, Executive Director of Vancouver’s Urban Aboriginal Friendship Centre, the Steering Committee was a diverse group of representatives from Vancouver’s local First Nations of Musqueam and Tsleil-Waututh, from urban aboriginal organizations, immigrant settlement organizations, and neighborhood houses, and academics from local universities. The Steering Committee was formed to help advise city social planners Baldwin Wong and Karen Fong in helping plan and implement a series of dialogue circles involving members of local First Nations, urban aboriginal, and immigrant communities.[1] The Steering Committee recognized that many new arrivals in Canada received very little information about the history of aboriginal peoples, and in particular of the devastating effects of government policies such as residential schooling, and therefore through no intention of their own were often left only with stereotypes and the negative images of popular culture as the basis for their knowledge about aboriginal peoples.
What could be generated, we wondered, if we could organize a dialogue process in which small groups mixing engaged and thoughtful participants from aboriginal and immigrant communities could speak and listen to each other in a safe and secure environment? How could we help begin to address the gaps of knowledge that existed, so that as our society continues to be changed by new arrivals, they can work together with First Nations and aboriginal peoples on building better communities through a process of shared understanding rather than ignorance and misapprehension? Could we produce together from these dialogues a story of who we are, and where we are, and who we aspire to be?

Who am I? Where am I? What is an immigrant? Who was here first?

[1] The Steering Committee’s first task was to help advise social planner Baldwin Wong in the City of Vancouver’s application for a grant from British Columbia’s Welcoming and Inclusive Communities and Workplaces Program (WICWP), which receives most of its funding from the Federal Government under the Canada-British Columbia Immigration Agreement. http://www.welcomebc.ca/wbc/service_providers/programs/welcome_program/index.page? The Dialogues Project homepage and a documentation of the process can be found at http://vancouver.ca/commsvcs/socialplanning/dialoguesproject/index.htm.
[2] 2006 Census of Canada, “World: Place of Birth of New Immigrants to Canada, 2006,” produced by the Geography Division, Statistics Canada, 2007. Romania at #7 was the origin of just over 28,000 immigrants Also, “Immigration to Canada from the Asia Pacific, 1961-1996,” Population & Immigration Statistical Reports, Asia Pacific Foundation of Canada (original source 1996 Census).
[3] Chinese Canada is not homogenuous, with a great variety of linguistic and social variation reflecting varied origins in not only in Asia, but from around the globe. The same can be said of South Asians, who like ethnic Chinese, often come to Canada as part of global diasporas that emanated from home villages decades and even centuries earlier, carrying to Canada a wide array of family journeys and complicated histories from around the world and over many generations. By 2006, South Asians had slightly surpassed ethnic Chinese as the largest group of “visible minorities” in Canada, but both are categories that envelop a complex spectrum of family and personal histories that cannot be reduced to simple ethno-cultural or racial categorizations. Shibao Guo and Don Devoretz, “The Changing Faces of Chinese Immigrants,” Research on Immigration and Integration in the Metropolis, Vancouver Centre, No. 05-08, February 2005.
Posted by Prof. Henry Yu at 9:41 AM No comments: 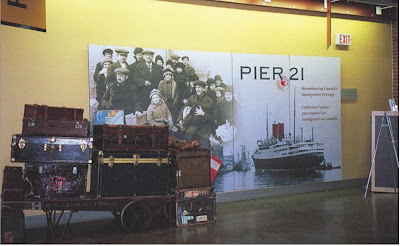