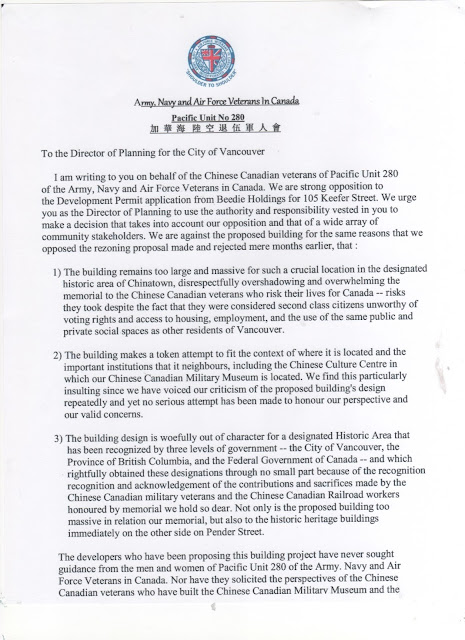 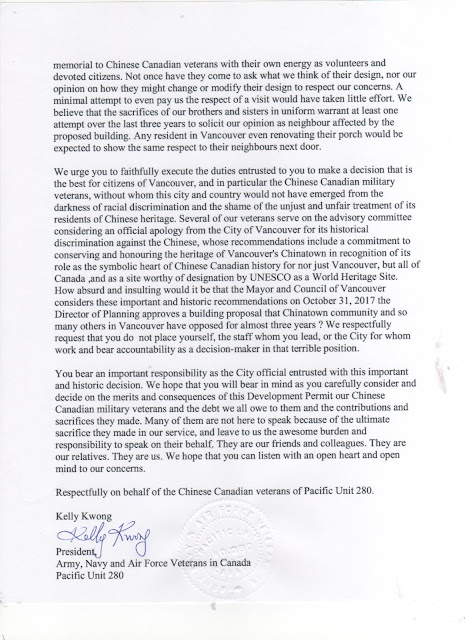 The Presentation made to Council and to community stakeholders such as the Chinese Benevolent Association of Vancouver can be found online at:
http://council.vancouver.ca/20171031/documents/rr1presentation.pdf

The Report, compiled by city planner Baldwin Wong, contains historical research on the history of racially discriminatory bylaws as well as discriminatory practices. It is well worth reading and can be found at:
http://council.vancouver.ca/20171031/documents/rr1.pdf

I had a chance to talk about the apology, and the role of the Advisory Council (upon which I had the privilege to serve as a volunteer), with Rick Cluff at the Early Edition on CBC Radio.
http://www.cbc.ca/player/play/1086205507505/

John Mackie of the Vancouver Sun also wrote a good article about one of the recommendations made for the City of Vancouver to pursue UNESCO World Heritage Site designation for Vancouver's Chinatown to help recognize its value as a heritage site within a global context, joining designation as a historical heritage site at the municipal, provincial, and federal level already:

Should We Consider Expropriation for 105 Keefer?

Should we consider expropriation for 105 Keefer?

Earlier this month, I was walking to the open house presenting Beedie Holdings’ newest application to develop 105 Keefer Street in Chinatown. I passed by the “World’s Thinnest Building” according to the Guinness Book of World Records. At the corner of West Pender and Carrall Street, the building is a curiosity, recently renovated with flashy neon lights. Few people know why the building is only six feet deep — barely thicker than a person lying down.
The history of that building encapsulates the history of Chinatown. It also provides a perfect example of what we might do to solve the problem of 105 Keefer. The original lot that is now 8 West Pender was bought by Chang Toy, who had come as a labourer to B.C. in 1874, when Canada was less than a decade old. Working in canneries and other odd jobs around the province, his intelligence and ability to work well with others developed into respected business acumen, and his successful Sam Kee Company bought the empty lot in 1903. Several years later, in 1912, the City of Vancouver decided to use its power of expropriation to unilaterally take the property.
Expropriation for the “public good” is a little known and often used legal power. As one of my high school teachers used to say: be careful when people in power begin using fancy “$5 words” like expropriation, because five syllable words usually mean you are on the wrong end of whatever is about to happen. In 1912, and for much of Vancouver’s history, Chinatown and Chinese Canadians like Chang Toy were on the wrong end of government power. The city wanted to straighten the street that is now Pender, and so they took Chang Toy’s land away for the “public good,” giving him what they determined was fair market value. He had no say. They didn’t need the last six feet on the edge of his property, so left him a useless sliver with no value. As an act of protest, Chang Toy put up a building on that narrow piece of land anyway, so that the thinness of the building itself would serve as a reminder of the treatment of Chinese as second-class members of Vancouver society.
Some of my students called the Sam Kee Building the “F— You Building”, because Chang Toy was making a statement with it about what racism had taken away from him and other Chinese in Vancouver. This remnant was a symbol of what could have been: the full-sized building that he could have built, but also full lives with wives and children, and dignity, respect, and opportunities that would never be.
For those who oppose Beedie’s development of 105 Keefer, what could be built instead of condos is the huge loss to Chinatown. Just like the rest of what could have been the Sam Kee Building, what we lose is what might have been.
Too many times in our history, governments have taken away property in the name of white supremacy. The reserve system, you could say, took away the best real estate and the richest resources from Indigenous peoples. Japanese Canadian removal from the B.C. coast and the subsequent sale of their property and belongings was mass expropriation in the cause of the ethnic cleansing of B.C. For Chinatown, the Sam Kee Building was just one among many cases. For example, Chinatown once extended to where Pacific Boulevard is now, but building the Georgia Viaduct took that land away. Now that the viaduct is coming down, Chinatown still deserves to get back what it lost.
On June 13, 2017, city council voted to reject the rezoning of 105 Keefer for 13 stories of luxury condos. Now we are faced with Beedie’s proposal for nine stories instead. The divisive fight continues, a lose-lose situation where nobody wins. We need an alternative.
Supporters of Beedie Holdings’ development proposal at 105 Keefer say that they own the property and can do what they want. But the city has always had the power of expropriation — as long as the government can justify that it is in the interests of the public good, and the property owner is given fair market value. We exercise this power all the time to build roads and parks and anything our democratically elected officials decide is in the public interest.
The City of Vancouver expropriated Chang Toy’s property exactly 105 years ago. I’m not a believer in mystical numbers, but wouldn’t it be poetic justice that 105 years after Chang Toy lost his property for the “public good,” that we do something truly for the public good at 105 Keefer — for the Chinatown community, for the Chinese Canadians who struggled against racism throughout our history, for all Vancouver’s residents who treasure our heritage?
Is it time that the city consider expropriation of 105 Keefer? I heard someone say that 105 Keefer is “just a parking lot” with little value. Even better reason that fair market value for expropriation should not harm Beedie Holdings. They are only losing a parking lot.
People I trust and respect tell me that Ryan Beedie is a good person. Several people testified at the public hearings in May that he has been a supporter of philanthropic projects around the city. Given an alternative that allows him to do the right thing, hopefully he will. A land swap, perhaps even building what Chinatown actually wants and needs.
Vancouver has changed a lot over the last 105 years. People in power do not support racism anymore. But how do we measure how far we have come? It’s quite simple, actually: Ryan Beedie has a choice. Chang Toy did not.
Dr. Henry Yu is an Associate Professor of History at UBC and the Principal of St. John’s College. He is the Co-Chair of B.C’s Legacy Initiatives Advisory Council following the 2014 Legislative apology for its history of anti-Chinese legislation
.
Posted by Prof. Henry Yu at 9:45 PM No comments: