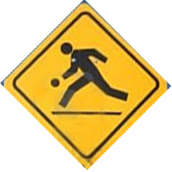 Ten years ago, commuting every day between downtown and the University of British Columbia on Point Grey Road, it struck me that there were a lot of “Children Playing” signs urging motorists to drive 30 km/h.

They seemed to be everywhere. Curious, I stopped and counted them. On or within a half block of Point Grey Road between Macdonald and Alma, there are 23 “Children Playing” signs.
That is probably the highest concentration in an eight-block stretch for “Children Playing” signs in all of Vancouver. I know that when I used to live in East Vancouver I could go for 10 blocks without even seeing a single such sign. In fact, when I was in Grade 2 walking home from school, I had been struck by a car and nearly killed trying to cross Knight Street because for a 10-block stretch between 12th Avenue and Kingsway, there was not a single pedestrian crosswalk at the time (there is now one), and certainly no “Children Playing” signs anywhere to be seen. This was despite the presence in that neighbourhood of multiple elementary schools and Clarke Park playground, as well as a very high concentration of family homes with young children.

For the last 10 years, every time I drove along Point Grey Road, those 23 “Children Playing” signs sent powerful messages about disparity in this city. After a decade of daily commuting, I have yet to see a single child under the age of 18 in those eight blocks. Indeed, my hunch is that if I accessed census data, I would find that those eight blocks might have the lowest number of school age children per capita in the city, certainly lower than any eight-block stretch in East Van.

Why are there 23 “Children Playing” signs along Point Grey Road when there are so few children playing? Perhaps it is about the desire of city engineers to slow down traffic and an inexplicable lack of road signs for 30 km/h that did not have children on them. Perhaps it is about wealth and the power to create favourable changes to traffic patterns in ways that those without wealth cannot.
Whatever the reason, I am glad that the charade of “Children Playing” on Point Grey Road will soon end. With the cars gone, the need for those 23 road signs will also be gone. Perhaps then we can all think about another message that those eight blocks long symbolized: the idea that the public good should take precedence over the desires of the few, even if those few happen to be extremely rich. Within those eight blocks of beautiful views of sea and mountains — and extremely high land values — there are three public parks giving every citizen in Vancouver access to those same views. I am sure that if those lots were sold, some very expensive houses could be built. But unlike in Malibu and parts of southern California, where private houses often cut off access to the water for everyone else, those parks represent the protection in Vancouver of the public good, even in the heart of great wealth and privilege.

Democracy does not require an equal distribution of wealth among all citizens. But it does require that great wealth not become synonymous with unchecked power. I will miss using Point Grey Road as a commuting shortcut, but at least Vancouverites will still have access both on foot and on bikes, and I will not miss those 23 road signs. The misuse of something as straightforward as a “Children Playing” sign was long a bad sign for all of us.

Henry Yu was born in Vancouver, growing up in East Van, and now teaches history at UBC.