Drawing a Line in the Sand: The Fight Over 105 Keefer 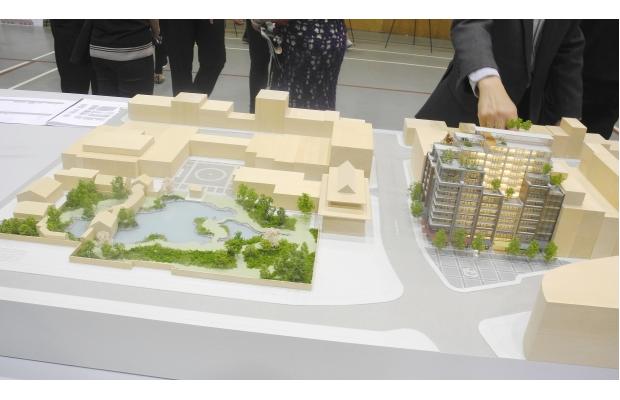 Model for a 13-storey building at 105 Keefer Street (at Columbia) in Vancouver’s Chinatown.
VANCOUVER -- A proposal for a 12-storey, 137-unit condo on an empty lot at Columbia and Keefer in Chinatown stirred up a storm of criticism last fall.
Chinatown activists felt the building looked more like Yaletown than Chinatown, and didn’t reflect the vision plan the Chinatown community had put together with the city.
So the developer went back to the drawing board to address their concerns. Last week, the Beedie Group unveiled a new 13-storey, 127-condo proposal at 105 Keefer that includes 25 social housing units for Chinese seniors.
“The previous proposal had no inclusion of seniors or non-market housing,” said Houtan Rafii of the Beedie Group. “We now have 20 per cent of the project, 25 units, of seniors housing.”
The building design has also been changed.
“The building look and feel, the materiality, the detailing is much more sensitive to Chinatown,” said Rafii.
“The massing, the size and the bulk of the building, its sight lines and its relationship to Sun Yat-Sen Garden (have been adjusted). The retail’s been rejigged. It’s all 25-foot increments, and it’s conducive to what’s found elsewhere in Chinatown.”
Still, the changes weren’t enough for University of B.C. history professor Henry Yu.
“I have nothing against the Beedie Group wanting to build a building that is condos, it’s just not here,” said Yu.
“This is an anchor site, it’s crucial for Chinatown as a heritage conservation area. It’s the heart of Chinatown. It’s next to the Sun Yat-Sen Garden, to the Chinese Cultural Centre, to the historic buildings on Pender, to the memorial square (at Columbia and Keefer).”
Yu would like to see the city take over the site, either by purchasing it or doing a land swap.
“Twenty-five seniors housing units I think is great, but it should be 250,” he said.
“If you want to rezone, there’s a high bar for rezoning in a historic area. This (proposal) is the same formula as a CAC (community amenity contribution) anywhere in the city for rezoning. So don’t do it.
“At UBC we did a study (that found) we need 3,000 Chinese seniors units over the next five years. Twenty-five isn’t going to get you there — 250 will get you farther. You’ll still have to do more, but that’s a better use (of the site).”
A city representative at an open house at the Chinese Cultural Centre Oct. 6 said there were no plans for the city to purchase the site.
The Beedie Group paid $16.2 million for the two parcels of land on the site in 2013. The site is 149 feet wide east to west, and 121 feet deep north to south. It used to house a garage, and will have to be decontaminated before anything can be built.
Beedie bought the site after the city rezoned parts of Chinatown, hoping to revitalize the long-moribund neighbourhood. Several developers quickly moved in, drawn by Chinatown’s cachet and proximity to downtown.
“It’s one of Vancouver’s most historic, revered neighbourhoods,” said Rafii. “It’s authentic, it has history, it has culture. It’s a great site.”
Architect Greg Borowski set up a panel at the Chinese Cultural Centre to show how the revised plan reflects the project’s “enhanced Chinatown character.”
“We’ve put part of our building adjacent to the (1909) Chinese Benevolent Society building, and compared items,” said Borowski.
“You can see (we have similar) recessed balconies, the 25-foot bay modules, the brick differentiation. You can see the pattern on the balcony guardrails, and the patterning on the window mullions behind.
“You can see the colour in the recesses of the balconies. You can see the parapets that extend above the principal parapet in front. The cornice line, you can see the two-storey expression at the ground floor with the retail. All of those things are directly informed by the Chinatown character.”
In the original design, the retail spaces on the main floor were long and had glass awnings. But Chinatown has historically been small shops on 25-foot storefronts, so the retail spaces have been changed to reflect this.
“We have fabric awnings. We do not have glass, and they’re retractable,” said Borowski.
“These fabric awnings go in and out, so it will also create an interest, because when someone opens their awning you’ll know they’re open. They’re all different colours, but then the colour palate is matched together so that it harmonizes.”
Yu just doesn’t think it harmonizes enough with the historic neighbourhood.
“You can do amazing things with that site,” he said. “It’s not being done with this.”
jmackie@vancouversun.com
===
© Copyright (c) The Vancouver Sun

The heritage battle for Chinatown

Historic Vancouver neighbourhood is being redeveloped, raising fears it will lose its character
The marketing line for the Keefer Block condo development in Chinatown is “Heritage Meets Modern.”
But just how much heritage will be left after a wave of modern developments washes over the historic district is a matter of debate.
A new proposal for the 700-block of Main Street would demolish the last three buildings from Hogan’s Alley, a once-notorious back lane that was the longtime home of Vancouver’s black community.
Another condo development at 231 Pender would replace a funky, Chinese-themed garage that is listed on Canada’s Register of Historic Places. Angelo Tosi’s family has owned their building at 624 Main since 1930. It may date back to 1895, and looks it — the fixtures and shelving are as old as the hills.
But Tosi is 82, and will probably sell when the price is right. He doesn’t expect his store to survive.
“It’ll be gobbled up by the monstrous buildings,” said Tosi. “And then they’ll take it all, and it’s finished. They won’t keep the heritage on the bottom, they’ll put down whatever they want.”
His fatalistic attitude reflects the changes in Chinatown, which is undergoing a development boom after zoning changes by the City of Vancouver.
The protected “historic” area of Chinatown is now Pender Street, while much of Main, Georgia and Keefer can now be redeveloped, with heights of up to 90 feet (nine storeys). A few sites can go even higher.
Two towers are going up at Keefer and Main — the nine-storey, 81-unit Keefer Block, and the 17-storey, 156-unit 188 Keefer. Up the street at 137 Keefer, a development permit application has just gone in for a new nine-storey “multi-family building.”
None of them has stirred up much controversy. But a recent public meeting about a 12-storey, 137-unit condo to be built on an empty lot at Keefer and Columbia got people riled up.
“There was a lot of angry people that night,” said Henry Yu, a UBC history professor who feels a “vision plan” the Chinatown community worked on with the city for several years is being ignored.
“The vision plan gets passed, (but it has) no teeth,” said Yu. “Actually (there is) no policy, it’s a wish list of ‘Oh, we’d like seniors housing, we’d like to do this, we’d like to do that.’
“Almost immediately, the two (highrise) buildings in the 600-, 700-block Main go up, and they’re just basically Yaletown condos. Not even Yaletown — Yaletown has more character.
“These are straight out of the glass tower (model), no (historic) character, obliterating everything in terms of tying it to the kind of streetscape of Chinatown. You’re going to split the historic two or three blocks of Chinatown with a Main Street corridor of these glass towers.”
Yu says Chinatown has historically been small buildings on 25-foot lots, which makes for a jumble of small stores that gives it a unique look and character. But the new developments are much wider, and just don’t look like Chinatown.
“The two 600-, 700-block buildings have a rain shield that’s an awning, a glass awning that runs the whole block,” said Yu. “That’s the design guideline for the city as a whole, but it was nothing to do with Chinatown, (which is) narrow frontages, changing awnings.
“We said that (to the city planners), we raised it and raised it, but the planners just shoved it down our throat.”
Posted by Prof. Henry Yu at 10:13 PM 2 comments: