Earlier today I had the privilege of being able to fly over from Vancouver to Victoria by float plane on Harbour Air in order to attend an unveiling ceremony for the historical marker commemorating the May 2014 apology by the Provincial Legislature for British Columbia's history of anti-Chinese legislation. I have served as one of the Co-Chairs of the Legacy Initiatives Advisory Council for the past two years implementing legacy projects, including the Victoria Chinatown marker, and was proud to see that the bi-partisan effort to acknowledge and work together to right historical wrongs are so strongly supported by the new government led by Premier John Horgan. 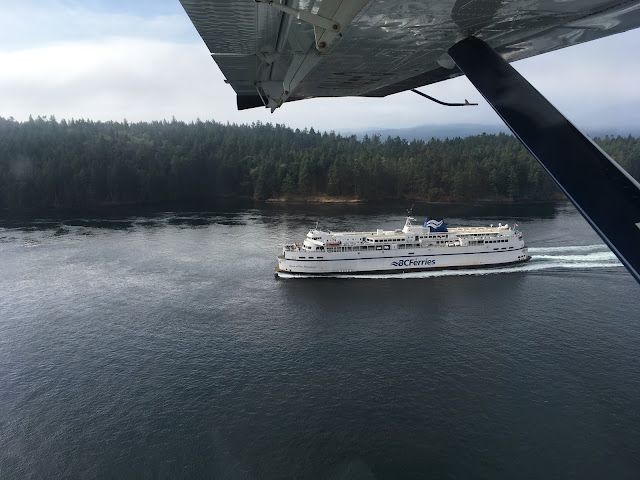 It was a beautiful day to fly in the small single engine float planes, and as I travelled back to Victoria, where I had spent a decade of my childhood including high school, the trip gave me time to reflect upon how far our province has come since I was a young child. Seeing the BC Ferries, which I used to ride often to visit my grandparents in Vancouver, brought back memories of the Cantonese-speaking old cooks who would make my favourite meal of clam chowder and French fries with gravy. Hearing them yelling in the kitchen of the ferry while I waited in line always reminded me of my grandfather, who had spent his life as a cook on the CPR's Alaskan cruise ship the Princess Patricia. Like them, he had spent a lifetime as a labourer in a society that often denigrated and looked down upon their hard work and sacrifice. As I flew over the same route I used to take riding the ferry, it struck me that my grandfather and his three brothers, and especially his third brother who used to live in Victoria, would have appreciated the symbolic meaning of today's ceremony. 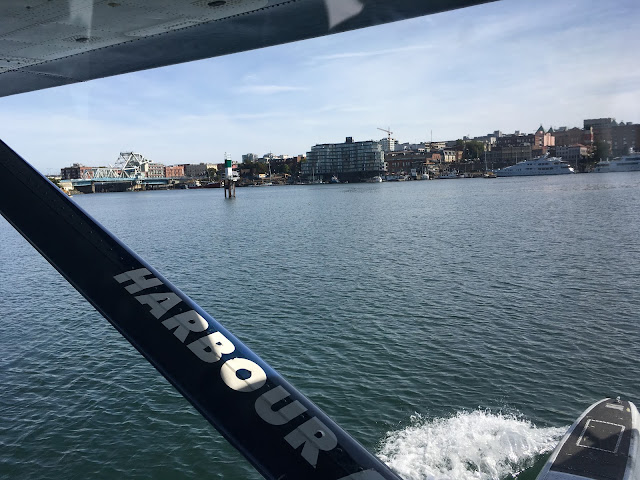 Landing in Victoria Harbour, with the familiar sight of the Johnson Street Bridge as we pulled into the float plane terminal. 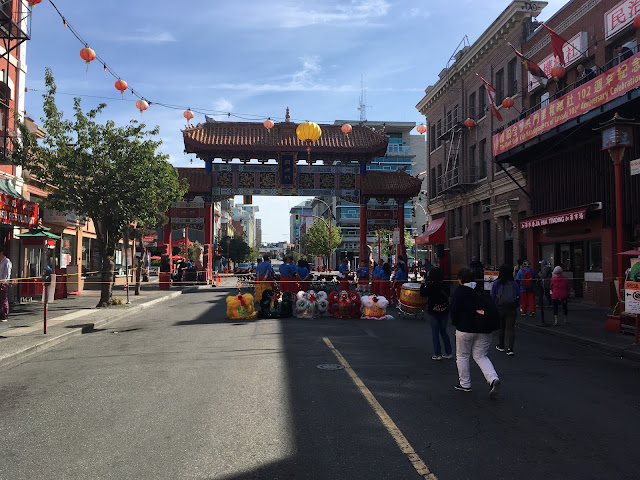 The area roped off for the ceremony near the Gate of Harmonious Interest where the historical marker is located. For over ten years, I would come every weekend with my mother to Chinatown to shop for our weekly groceries. 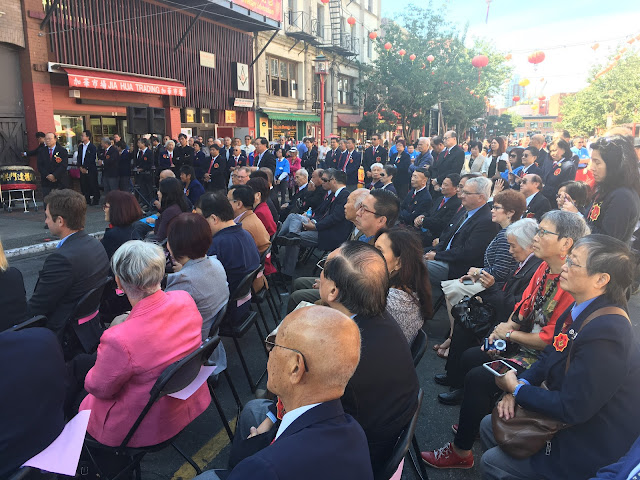 A big crowd, including large numbers from the Dart Coon Club (the Chinese Freemasons) of both Victoria and Vancouver. 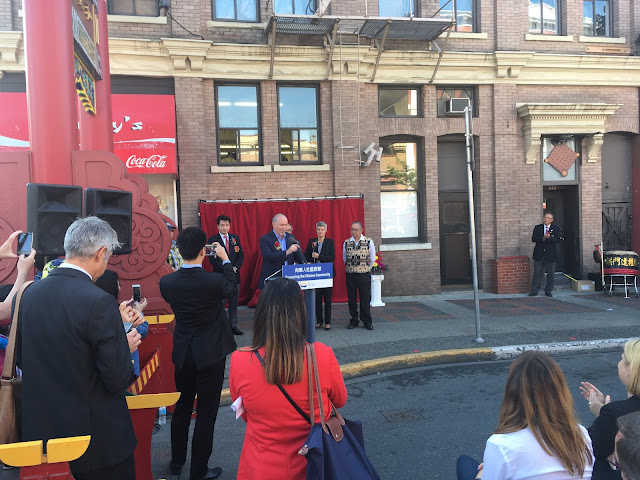 Premier John Horgan speaking about the history of anti-Chinese legislation in the Province of British Columbia, and the unanimous vote by all parties of the B.C. Legislature in 2014 to apologize for historical wrongs. 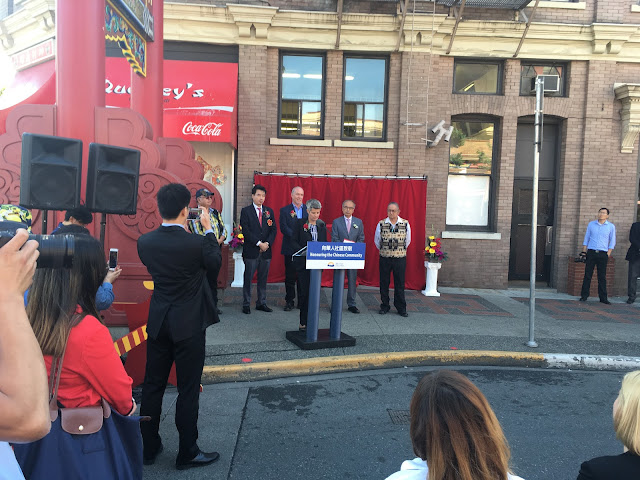 Mayor of Victoria Lisa Helps issuing an apology from Mayor and Council of Victoria for the long history of anti-Chinese by-laws and city policies, including the infamous 1885 cubic air ordinance targeting Chinatown residents that justified police raids that harassed Chinese workers and forced them to pay fines that raised revenue for the city. 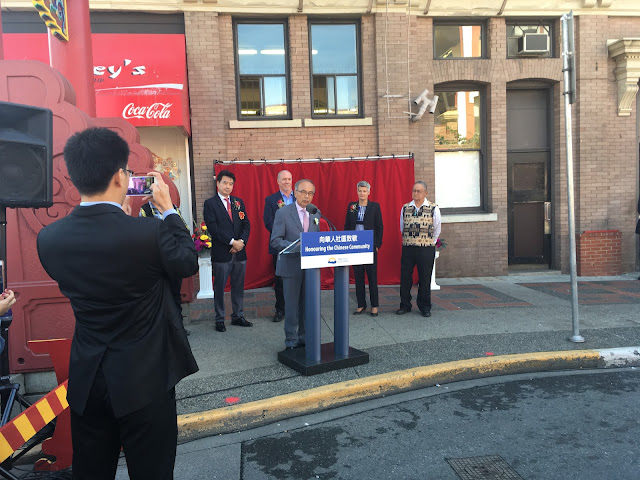 Minister of State George Chow, MLA from Fraserview and former City Councilor of Vancouver talking about how he spent the ages of 4-14 in Hong Kong separated from his father in Canada because of anti-Chinese immigration laws. 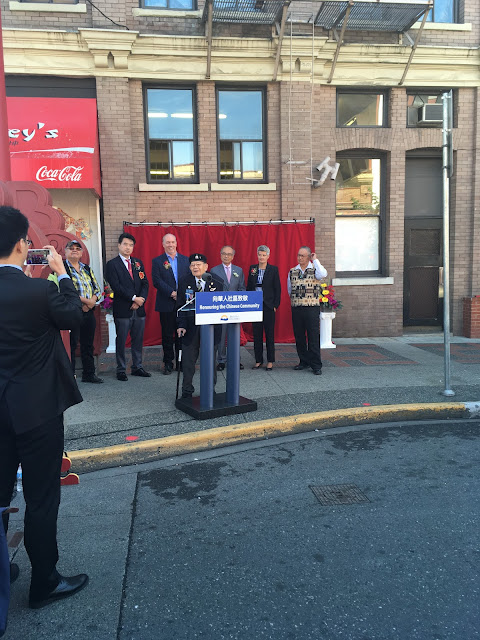 Third-generation Chinese Canadian and World War II veteran Victor Wong sharing his experiences growing up in Victoria and volunteering to fight for Canada even though Chinese were disenfranchised and subject to racially discriminatory laws. He talked about fighting "two wars," one against the Axis enemy and another for the rights and freedoms denied to the Chinese Canadian community. The large crowd gave the 90 year old Mr. Wong a standing ovation after he finished speaking. http://www.timescolonist.com/news/local/third-generation-canadian-was-treated-like-a-second-class-citizen-1.1063714 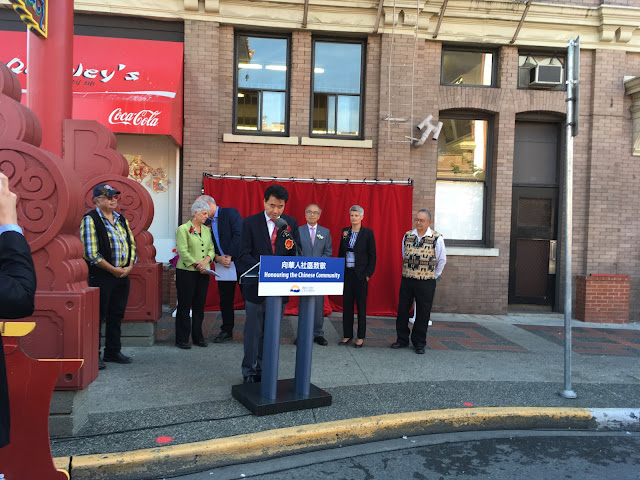 Legacy Initiatives Advisory Council member Thomas Chan, who was the primary organizer and community leader behind today's ceremony. Behind him are Esquimalt Nation Chief Andy Thomas, who spoke eloquently about how times had changed and what he hoped were substantive measures of reconciliation moving forward that today's ceremony represented for B.C. society. Next to Chief Thomas is Minister of Finance Carole James, who was the MC for the ceremony and in whose provincial riding Chinatown sits. On the far right is Songhees Elder Elmer George, who opened the ceremony with a blessing and whose presence along with Chief Thomas reminded all in attendance that Chinatown and the city of Victoria are in the traditional, unceded territory of the Lukwengen peoples.
Posted by Prof. Henry Yu at 10:13 PM