All Our Father's Relations 7pm show sold out on Jan. 28 but 9pm show added

The response to All Our Father's Relations has been phenomenal. The special Chinese New Year's screening on Saturday, January 28 has been sold out almost a week beforehand, and to accommodate the high demand a second showing that night at 9pm has been added. Get your tickets before that show sells out too! 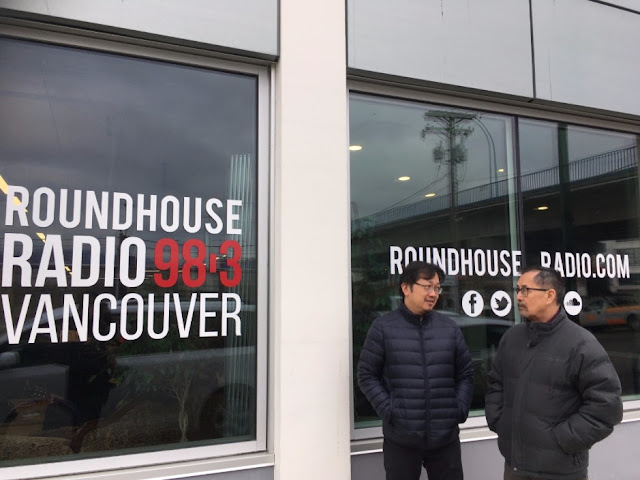 Media attention to the film has been great. I had the pleasure of being on Minelle Mahtani's Sense of Place show on Tuesday morning with Howard Grant and Sarah Ling to talk about All Our Father's Relations. The clip of the conversation can be heard at:
http://cirh.streamon.fm/listen-pl-7569

A powerful and moving moment hearing Howard speak about what the experience of making the film, and going to his father's home village in China had meant to him...

A story appeared last week in the Courier, and another in the Source this week. Another story will be in the Vancouver Sun for Chinese New Years and Elder Larry Grant and Sarah will be on CBC's On the Coast Friday. 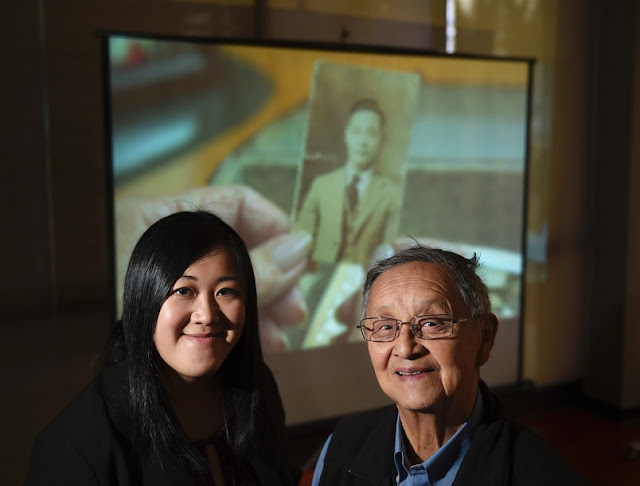 Filmmaker Sarah Ling travelled with Larry Grant and his family to their ancestral home in southern China. Grant’s father left the village of Sei Moon and moved to Vancouver in 1920 where he eventually married Agnes Grant, who was of Musqueam descent.
Photo Dan Toulgoet

Surrounded by total strangers in a tiny village in southern China, Larry Grant experienced a pivotal, if not uniquely bizarre, moment that instantly tied to him a past generation.

It was November 2013, and Grant was flanked by three of his siblings and a documentary film crew tasked with travelling to the family patriarch’s place of birth.
Strangers on the surface, some of those Chinese villagers who greeted the Vancouver group turned out to be blood relatives.
“They were feeding us and introducing us to cousins, nephews and nieces that we had never met when along comes an uncle I didn’t know that I had,” Grant recalled. “I was taken aback. Holy smokes. He was a spitting image of an uncle that had come to Canada and lived for 20-plus years here before his death. Here was this guy who looked like he stepped out of the grave. It was unbelievable.”
The re-unification process that played out is a central theme to the film All Our Father’s Relations, which screens in Vancouver on Jan. 28 at the Goldcorp Centre for the Arts to coincide with the Chinese New Year.
The film follows the interconnected histories, relationships and hardships experienced by both Chinese- Canadian immigrants and First Nations from across Metro Vancouver.
The Grant family’s story is a microcosm of those experiences and stories. Grant’s father, Hong Tim Hing, left the village of Sei Moon and moved to Vancouver in 1920. He worked on farmland located on Musqueam territory, and eventually married Agnes Grant, who was of Musqueam descent.
Government legislation of the day, however, prohibited the couple from living together on the reserve; Hing was forced to live apart from the rest of the family. Even though his parents were married, Grant likened his upbringing to being raised in a single-parent home.
Barriers upon barriers targeting Chinese-Canadians and indigenous populations are featured throughout the film: the Indian Act, residential schools, the banning of potlatchs and the Chinese Head Tax, among others.
The film calls attention to those past wrongs, but also highlights the resilience required to live through those experiences.
“All of those hardships that were endured by our ancestors, of not having parity, equality and equity in society — I would like the viewers to have a better understanding of that,” said Grant, who’s now 80 and still living on the main Musqueam reserve in South Vancouver. “A lot of things were said and done. But you just did your best. I just kept pushing and pushing.”
Grant graduated from high school in 1955 and went on to a career as an auto machinist and heavy duty mechanic in the longshore industry. He now works at UBC in the First Nations and Endangered Languages Program, to help keep the Musqueam language alive.
It was at UBC that Grant first crossed paths with Sarah Ling, a history student and fledgling documentary filmmaker at the time. Their initial collaboration was a trilingual children’s book based on Grant’s life that was published in English, Chinese and the Musqueam language, hən'q'əmin'əm.’
The plan to hatch the film was then born in 2013, shortly before the Grants left for China. In her role as producer, Ling helped family members tell their story and lined up the logistics of the filming and editing process.
Along with director Alejandro Yoshizawa, Ling witnessed first-hand the reunification of families once separated by more than 10,000 kilometres.
“It was really profound — when they first saw their uncle and embraced him, I think it was hard for them to speak,” she said. “You could see so many memories flooding back. I felt really privileged to be there.”
The Grants were in Sei Moon for less than 48 hours. Documenting the trip, bridging the cultural gap and establishing communication — they had three translators along — was pivotal. A journal written in Cantonese was shown to Grant that traced centuries of his father’s roots in China.
“I was told, ‘You are the 17th generation of this house.’ Oh my God. That was my reaction,” he said. “Going there and being hugged and fed, it’s not just something in a book at that point. To be embraced and hear someone say, ‘This is where you belong, this is where you come from’ was very emotional.”  Tickets for All Our Father’s Relations are available online only and cost $15. The screening kicks off at 6:30 p.m. at the Goldcorp Centre for the Arts. Ticket info is available online at eventbrite.ca.

When the four Grant siblings learned their late father’s ancestral village, Sei Moon, was about to disappear, they finally decided to go to Guangdong, China for the first time.

“Our uncle was the one that suggested we go on the trip, because China was going to put the bullet train through the village. Uncle said if you want to see your father’s village, you got to go now. After Uncle Edmund had said that, then I was on board,” says Larry Grant, second eldest of four siblings.
All of My Father’s Relations follows the family’s journey and was awarded Best Canadian Feature when it premiered this past November at the Vancouver Asian Film Festival. The film, which sold out weeks before the VAFF premiere, will have an encore screening Jan. 28 at SFU Woodward’s Goldcorp Centre for the Arts – Djavad Mowafaghian Cinema.

Larry Grant (right) and Howard E. Grant (centre) meet their uncle in China for the first time
According to its website, the film records the interconnected histories of Chinese Canadian and First Nations relations along the Fraser River in British Columbia.
“Dating as far back as the 19th century, relations between Chinese and First Nations in Canada were often respectful and mutually beneficial; both peoples supported one another in the face of marginalization and racism,” states the website.
The film features siblings Helen Callbreath, Gordon Grant, Larry Grant, and Howard E. Grant, who are elders with Chinese ancestry from the Musqueam Nation. The siblings share their experiences growing up at Musqueam and in Vancouver’s Chinatown, recalling how their lives, as well as their parents’, were impacted by discriminatory legislation.
The Grants’ father, Hong Tim Hing, left the village of Sei Moon in Guangdong, China in 1920, arriving in Vancouver, BC – the unceded territory of the Musqueam hən̓q̓əmin̓əm̓-speaking people. He worked on the Lin On Farm at Musqueam Indian Reserve 2, where he met his wife, Agnes Grant.

Director/producer Alejandro Yoshizawa previously worked with Larry Grant, along with the film’s co-producer Sarah Ling, on the Chinese Canadian Stories project between 2010 and 2012, and wanted to document this meeting as this was a story not often told in Canadian history.
“When Sarah and I heard that the Grant family were going to go back to China, go to their father’s ancestral village for the first time, we thought that would be a fantastic thing to record and a good starting point for a film. We went on that trip in 2013,” says Yoshizawa.
The family had some support from the Chinese Consulate, which helped facilitate transportation and access to the village. The consulate also provided two days with an interpreter on their trip to the village.
Grant says the Chinese Consulate heard about their story and realized the family was considered Chinese (living) abroad.
“They got interested in how we were raised in both societies,” says Grant.
Grants says that there are many other people with the same lineage, but who know only one side or the other.
“But we grew up knowing of both sides of our lineage. That’s the part I believe to be the real trigger to be interested in it … because we were aware that one side was completely Indigenous and the other side was Chinese,” says Grant.

Director Alejandro Yoshizawa on the set of All Our Father’s Relations.

For Grant, his mother epitomized the value of oral history because she didn’t read or write in any language.
“You carry the family tree in your head – all the historical things that happened and the stories. You’re told these stories over and over again ‘til you’re sick and tired of hearing them. It’s not until you realize that what it’s all about, that you get it and understand why it’s so important,” he says.
Because the film was mostly based on oral history, it presented challenges in terms of images. The family also had very few family photographs. Yoshizawa says this is why he decided to incorporate animation.
“That was one of the reasons why we added a few of the animated sequences, because it adds a different aesthetic to the film. It’s meant to bring the audience back in time, to experience that with moving images as opposed to black and white photos and archival documents,” says Yoshizawa.

For more information, visit www.allourfathersrelations.com
Posted by Prof. Henry Yu at 2:18 AM