Media Stories about All Our Father's Relations

Out today online a great story by Joanne Lee-Young in the Vancouver Sun, the Vancouver Province, and the Calgary Herald (and in the print versions tomorrow--Saturday, January 28), for Chinese News Years and the screening of All Our Father's Relations downtown... 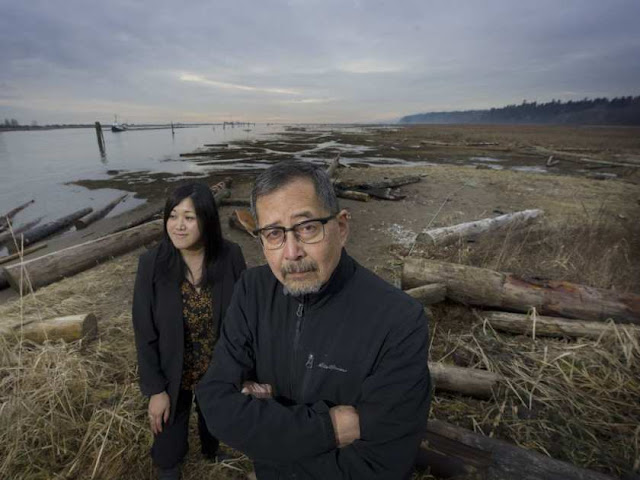 Howard Grant on the banks of the Fraser River at the Musqueam reserve in Vancouver along with film producer Sarah Ling. MARK VAN MANEN / PNG

At the Goldcorp Centre for the Arts on Saturday night, there will be a different kind of Lunar New Year event, one rooted in less-inclusive and shameful times of race relations in Canada.

It’s a special showing of All Our Father’s Relations, a documentary film about the Grant siblings, three brothers and a sister, the children of a Chinese father and a Musqueam mother.

Over many years, they were shuttled between their childhood home on Musqueam land in south Vancouver and Chinatown as government policies that discriminated against both Chinese immigrants and First Nations separated their family.

Their father, Hong Tim Hing, left southern China in 1920 on a steamship bound for Vancouver, using a “paper name,” illegal documents that made him out to be the blood relative of another settled Chinese worker, and paying a steep head tax to gain entry. He laboured at vegetable farms, living in a bunkhouse there with other Chinese workers. They were all male and single in a faraway land. He eventually met and married their mother, Agnes Grant.

“My mother was the last fluent speaker of hən̓q̓əmin̓əm̓, our language,” said Howard E. Grant, the youngest brother. “She connected our community.”

The film highlights the cooperation between Chinese and First Nations in early B.C. history. There were about 20 vegetable farms on Musqueam land in the 1950s that supplied produce across Vancouver. And even earlier, there were gold mining operations along the Fraser River where Chinese workers built businesses on First Nations land.

The film is also a compelling story of family reunion, respect for elders and ancestors, and a welcoming of fresh beginnings, which exemplify the core of how and why the Lunar New Year holiday exists.

“Those are actually the underlying values that have become more eroded now in practice,” said University of B.C. history professor Henry Yu.
The film follows the Grant siblings on their first trip in 2013 from Vancouver to Sei Moon, the village near Zhongshan in China’s southern Guangdong province that their father had left almost a century ago.

In an outdoor courtyard, they meet Cantonese-speaking relatives, including the youngest brother of their late father. There are hugs and later, tears. 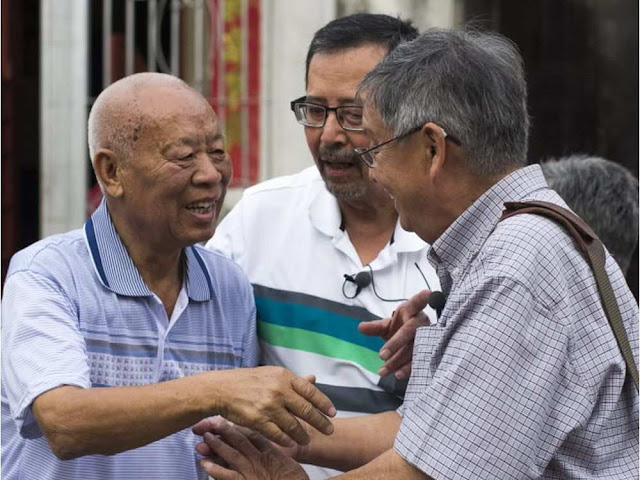 Said Howard of one relative he met that day: “I found out, that that lady is Uncle Tommy’s daughter.” Grant said his uncle, whom he grew up with and loved, had followed his father to Canada. “What can I say to a woman, who was about my age, who said, ‘Did you know my dad?”

There are other poignant moments. The siblings moved from Musqueam to Chinatown when, with their mother, they were stripped of their status under the Indian Act because their father was not aboriginal. But, growing up in Chinatown with a father who scorned the poor Cantonese language skills of his half-aboriginal children meant they escaped the horrors of the residential schools, which their cousins did not.

The film, directed by Alejandro Yoshizawa and produced by UBC history graduate Sarah Ling, has already won some awards and is gaining interest. Organizers this week added a second screening at 9:15 p.m in addition to the earlier sold out show. (Ticket info is available online at eventbrite.ca.)
Since that first trip, Grant has made another trip to the village and then to other parts of China to learn more about things he feels he has known all his life.

“They were like us. They burned (offerings) for their dead. They fed their dead. They had ceremony. From a cultural perspective, in regards to (eating at) a round table, we have our long house in a circle as well. It gives opportunity for dialogue. Confrontation was not a position we took. It was more, ‘let me hear what you have to say and then let’s talk about it.’ We were so close.”

CBC's On The Coast with Stephen Quinn

“Ultimately, it’s a family story, and seeing how they negotiate not only Canadian legislation, prejudice, but also their own relationship with their mother and father. I think it speaks to a lot of people.”